Woofers comedy club is back! Featuring some of the best comedic talents in live comedy right on your doorstep here on the Fylde coast. Hosted by our very own regular

Woofers comedy club is back! Featuring some of the best comedic talents in live comedy right on your doorstep here on the Fylde coast. Hosted by our very own regular MC Phil Walker, you are pretty much guaranteed a great night of side-splitting fun!

Headlining November we have a class act that I’ve admired for many years, Mr Markus Birdman.
Markus is one of British comedy’s most experienced and well-travelled performers. In demand all over the UK and abroad, Markus is a veteran of the Edinburgh Fringe with 11 solo shows to his credit and headliner status at all the top clubs, including The Comedy Store, The Komedia, Hot Water, The Stand and Soho Theatre. He’s performed at the Melbourne, Adelaide, and Perth Comedy Festivals and was nominated by the New Zealand Comedy Guild for Best International Guest. His international gig list includes Pakistan, Singapore, China, UAE, Austria, Spain, Norway, Sweden, Finland and India to name a few. Which has been nice, considering no-one’s now going anywhere.

He had his own Netflix Stand Up Special, ‘Live in Amsterdam’ & was also co-writer on Jayde Adams’s Amazon Prime Stand Up Special, ‘Serious Black Jumper’
“A consummate comic…. energetic, engaging, thought-provoking and funny.” – The Stage.

Joining Markus is one of the UK’s finest comics, also a headline comic the ace Eddy Brimson. Since turning to comedy in 1999, Eddy has well and truly established himself on the live circuit and is regarded by some as one of the leading headline comics in British comedy and the world. His career has even taken him from Dundee to Dubai!

He’s appeared on television in many different guises from Hari Krishna in both Smith & Jones and Heartburn Hotel, to hard-nosed Villain in Eastenders, where he turned over Frank Butchers car lot! Other appearances include Absolutely Fabulous, The Thin Blue Line and Hale & Pace, The Bill, Silent Witness, Casualty, Between The Lines and the HBO movie The Infiltrator where he played a leading gang member.
Eddy is also a regular radio contributor to shows on BBC Radio 5 and Talksport and also a prolific writer. In short, this is one gifted and hilarious performer.
“Quite simply brilliant” – Sky TV.

Making a welcome return to Woofers after a 3 year absence from comedy is the wonderful Panella Mellor. Following in the footsteps of Sarah Millican, Jack Whitehall and Jimmy Carr, Penella Mellor is not a good grown up but she is a multi award winning comedian who is taking over the comedy world with her delightfully dark material! Original, dark, effortless,
Mary Poppins meets Kill Bill.

‘A dark-edged set full of disdain for her daughter. Yet it never seems nasty, more a wry confessional about her own lack of maternal instinct. Such unflinching approach to the ‘bad mum’ persona is admirable, and she delivers with an appealing coolness… top comic in waiting’ – Chortle.

Admission still ONLY £10.50 (£12.50 on the door) so book early to avoid disappointment AND save yourselves some money! 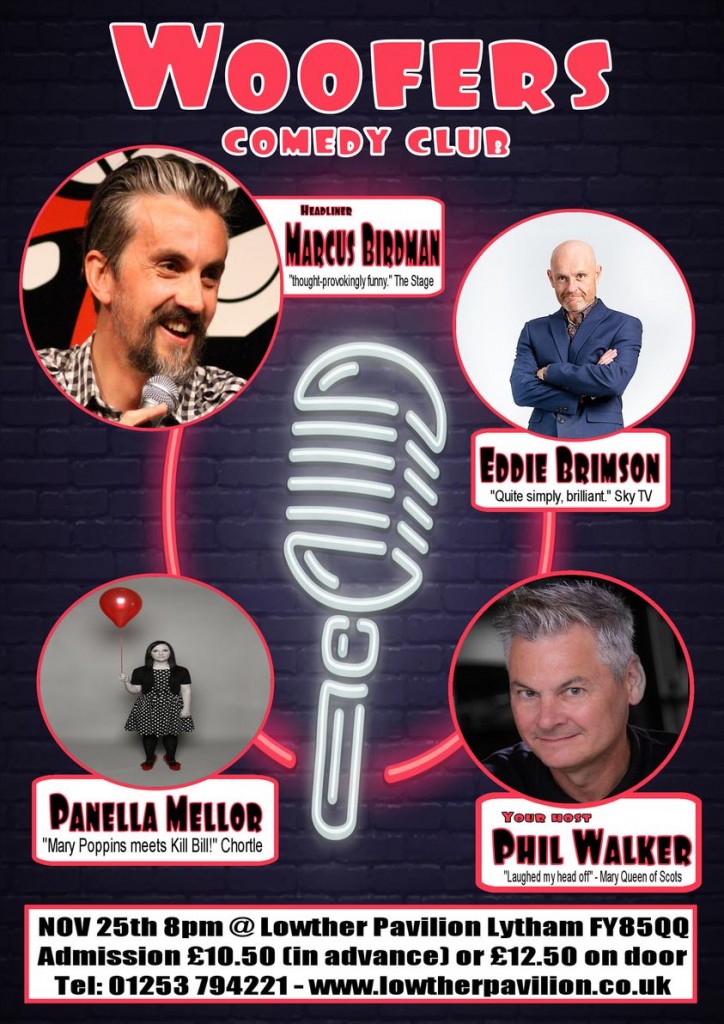