Every September thousands of volunteers across England organise events to celebrate our fantastic history and culture. It’s your chance to see hidden places and try out new experiences. Heritage Open Days is all about celebrating community and local stories, which feels more important than ever. After much discussion with our community and in line with government guidelines, Fylde Council made the difficult but necessary decision to cancel their 2020 Heritage Open Day event at the Town Hall with everyones health and safety in mind. Not wanting to miss out, we asked Sarah Kellam, Great Great Grandaughter of Richard Ansdell, to honour this years theme of Hidden Nature with a fascinating article about a hidden treasure we recently discovered behind a Richard Ansdell painting

It is entirely appropriate that the theme for this years Heritage Open Day is Hidden Nature as I am about to tell you the story of a truly hidden nature study by our friend, Richard Ansdell RA (1815 -1885)

Margaret Race of the Friends of Lytham St. Annes Art Collection and myself the great, great granddaughter of Richard Ansdell decided to jointly acquire the magnificent Three Sheeps Heads (Figure 1) an oil sketch by Richard Ansdell to boost the Collection as a curio and an insight into how Victorian artists prepared for their large canvases. They would paint a fully detailed oil sketch on a piece of board that they had hanging about the studio basically a practice piece for the major canvas to come. It was vitally important for them to get every detail right as these canvases were usually destined for the Royal Academy Annual Exhibition which was the major showcase of work and basically the pinnacle of every artists career. Richard Ansdell was one of the limited number of top artists given the distinction of becoming a Royal Academician after years of waiting for a slot to become available (usually through the death of an existing member) and then going through a strict process of sponsorship by eminent gentlemen of the time when many paintings would be given a critical eye and every detail examined. While this was going on, the artist would have ARA after their name as an Associate of the Royal Academy to progress to RA once they were fully accepted. Richard Ansdell became a Royal Academician in 1870.

So, although not often seen and probably propped up against a wall in the artists studio for reference, these oil sketches were vital in the successful progression of a large, finished, signatured masterpiece for public show. They also served a useful purpose for the artist as, in the days before photography, they were either done on the spot from life or by memory (maybe from a pencil sketch) back in the studio. We take photography for granted these days as an aide to painting especially from nature. 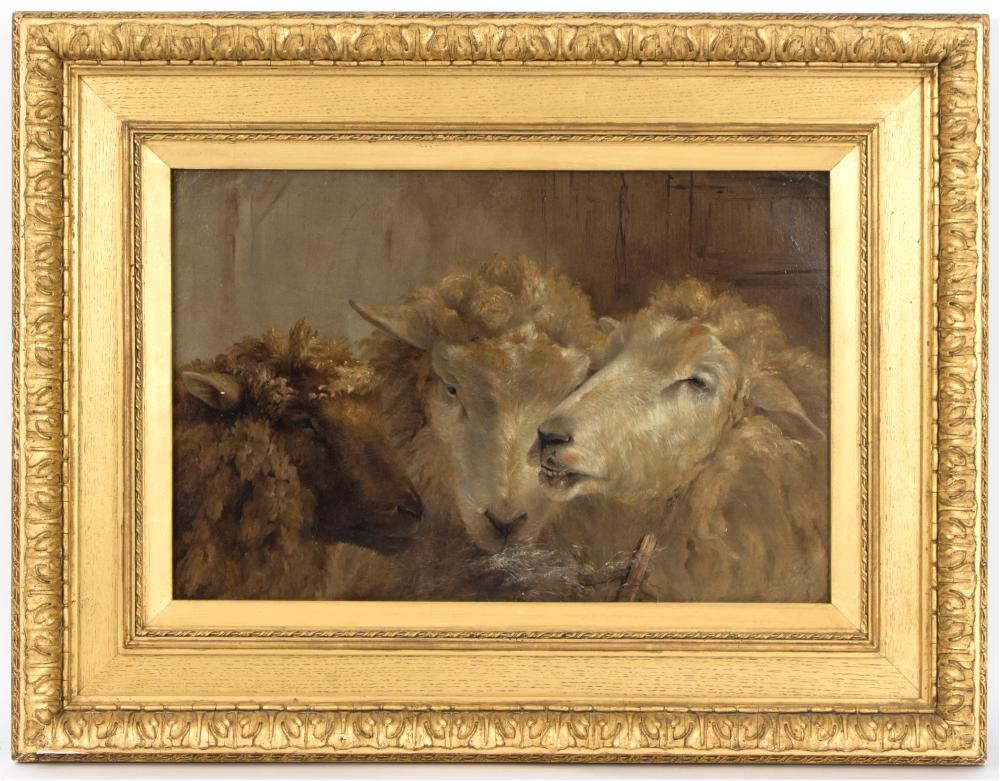 A few months after presenting Three Sheeps Heads (Figure 1) to Fylde Borough Council, the Collections Development Officer made a remarkable discovery! Whilst carefully removing the backing board for conservation purposes, she found this remarkable little sketch (Figure 2) on the reverse of (Figure 1) hidden away and probably not seeing the light of day for a couple of hundred years! This is truly an example of Hidden Nature! We were all astonished. It is an oil sketch or practice piece of some wood on a beach. It is quite in keeping for both sides of the board to be utilized as artists couldnt afford to waste materials.

Once the Collections Development Officer shared it with me, I couldnt stop looking at this new discovery its certainly done by an expert hand its absolutely beautiful. The background and foreground are roughly painted but they are there just to give it context.

I am 99% certain that this is also by Ansdell. If you think of a sketch book which artists use as a working tool to practice and record the same goes for oil sketches every surface will be utilized but with oils, it has to be board, not paper and therefore not in book form.

I looked through Christies catalogue of Ansdells Studio Sale after he died in 1886. This is a very telling document where I found reference to the sheeps heads. There are lots of oil sketches and studies of animals, rocks, woodland, coastal scenes all bought by dealers and they all had to go somewhere. This study is entirely in line with my original theory that the sheeps heads were a preparatory sketch. Looking at the subjects of Ansdells sketches of nature tells me a lot about where his interests lay. 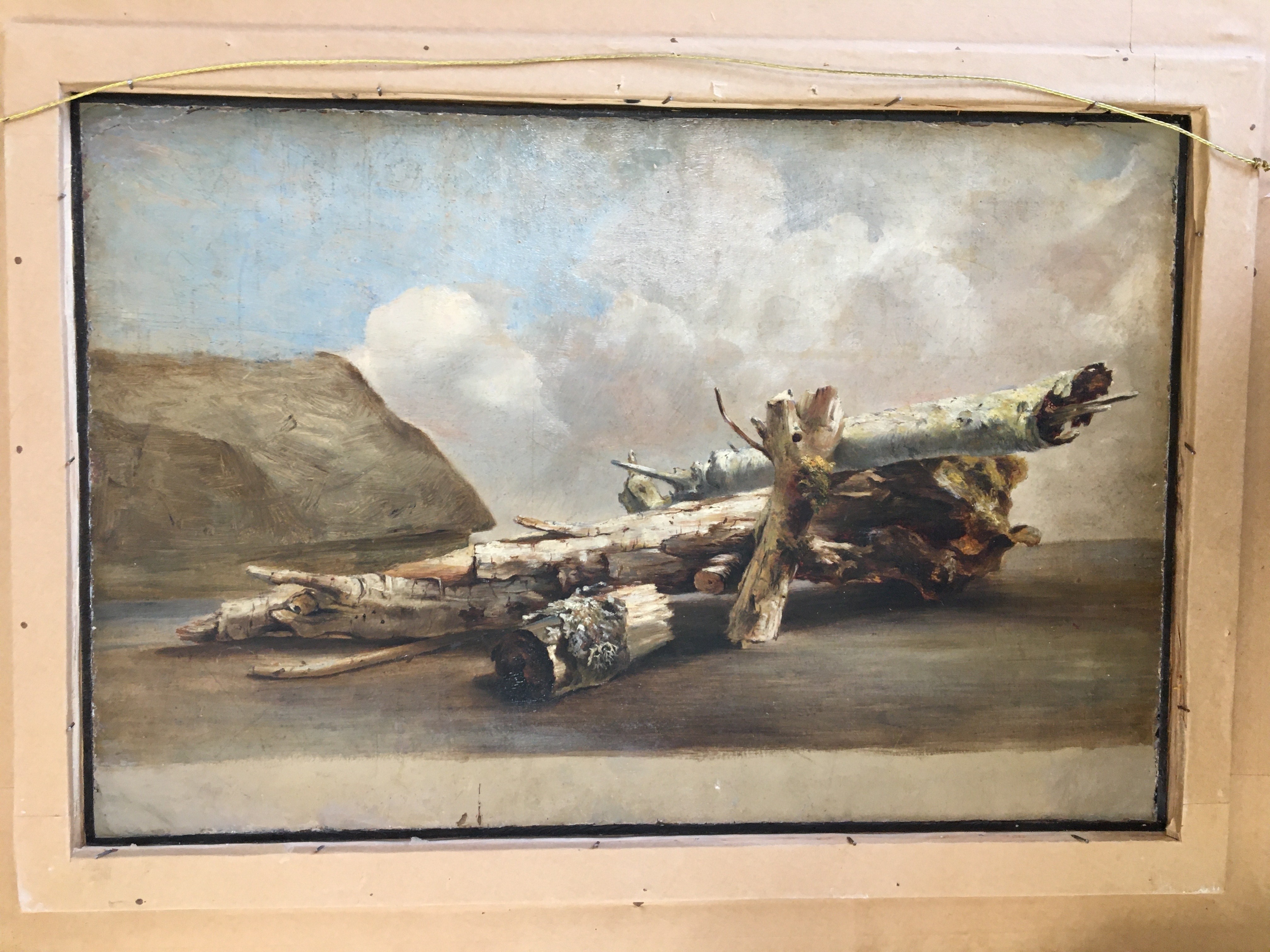 The sketch of wood (Figure 2) is definitely by a practiced and confident hand. Although it is set with a coastal backdrop, I dont think its of driftwood as would be expected its part of a silver birch tree which is rotten and dead. It was placed on a beach for perspective certainly not your beach at Lytham though due to the headland! Had it been driftwood, that beautifully painted lichen and moss, etc. would not be there and would have been washed away by the sea. This is certainly the sort of thing the Victorians were studying at that time and would have been an appropriate garnish for a larger canvas. The Victorians were fascinated by plant forms such as lichen and moss and there was high fashion for fernery and shells at that time. This is also a study in perspective and colour and has been preserved down the years for being hidden inside the frame and on the reverse of a painting that had been hiding its secret all that time.

The provenance of this sketch would of course be the same provenance for Three Sheeps Heads which was sold at the studio sale in 1886 to a Mr. Shepherd for 5 15s 6d. It measures 31 x 41 cms and is unsigned and undated. (sketches were never signed and/or dated by the artist).

Heaven knows where its been for the past 150 years or so but wouldnt it be marvellous is find this little sketch copied and depicted into one of Ansdells major paintings I hope you, like me, will keep your eyes open! You never know stranger things have happened!